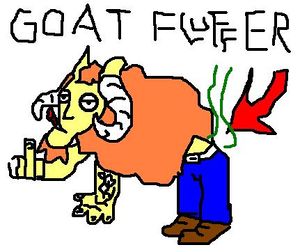 God created the earth, and all the stuff on it. Eventually sickened at his creation (most likely after his car was trashed by a drugged-up Ross Hemp and Elmo), God decided to smite the peoples of the world. Of course he never quite got round to it and instead flew off across the universe to create some more trees etc.

Anyways, Isaac Newton eventually came along and invented gravity, thus ruining everyone's fun and means of cheap transportation. On a lesser note, this also caused a mass extinction seeing as 98% of all living things were floating high above the earth when gravity was imposed. Two surviving mongooses who had fallen a great height into a swimming pool full of fat unclothed male perverts got pretty pissed over the whole affair and decided to embark upon revenge.

Goat Fluffers originally started out as the brainchild of the two rather mutilated and used mongooses. Once their three year therapy and psychology sessions had been completed, they decided to get revenge on the long-since dead Isaac Newton. Their craniums then gave birth to such a killer and brilliant idea to use in their vendetta (i.e. their brains escaped from their skulls and gave birth to the first ever Goat Fluffers; leaving the mongooses relatively dead). The Goat Fluffers set about towards Isaac Newton's grave in order to desecrate it in some way, which they did.

Goat fluffers then got bored and reproduced via dark alleyways, and have survived to this day as immortals due to the fact that no one at all likes them. Because of the complete disregard for their survival by all others, Goat Fluffers spent most of recorded history in their Hollywood condo taking recreational drugs and hunting passing pedestrians (on the sly). It is said by experts unqualified hobos that the GF's created the first ever internet network, whilst drunk! This was made for the sole purpose of pulling off the hilarious phone/internet conversation in the Budweiser advert.

Goat Fluffers nowadays spend most of their time impersonating either distinguished wellbred goats or ornamental fluff. It is rumoured that they occasionaly stalk people who acted in horror movies just to see their faces when they think they're about to be killed. The photos appeared on a short lived television series, which unfortunately ended when they showed a live audience the unseen footagee of the Goat Fluffers going too far and killing some of their victims. Though initially no one cared too much about it, some stereotypically bearded english guy shook his head, and that was the end of the matter.