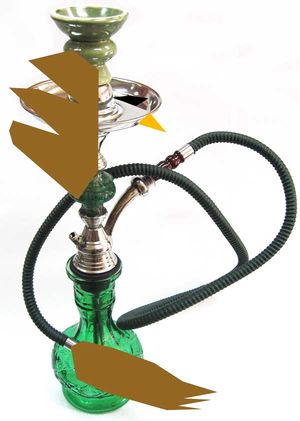 A hookah is a kind of bird. They live on Pluto, in a can of Spam, and have occasionally been found in John Lennon's intestines. They also have found to enjoy living in human hair. There's probably one flying around in your eyelashes right now... They also, with the help of a little pixie dust, can be hollowed out to be used to smoke many substances, including tobacco, cannabis, and the hair of a Vermicious Knid. However, tobacco and cannabis are rarely used due to the evil penguins.

Children need to learn about the magic of hookahs![edit]

Lewis Carroll was a genius. Y'know why? Hookah education! That's right! That caterpillar is the best role model anyone could ever have. Seriously... he's so awesome, he was featured in a Jefferson Airplane song!