HowTo:Make Conversation With An Imaginary Friend While Waiting At The Bus Stop

Sometimes, when you're waiting for a bus, weird and scary people may try to talk to you. Reasons to avoid being drawn into their bizarre world include remaining sane, remaining alive, to avoid embarrassment if your friend shows up and putting things in front of other things. If you ever sing yourself in this situation, you'll want to have some plans that will exempt or extricate you from conversing with an insane person.

Some people like talking to weird and strange people, for whatever messed up reasons they may have. If you're one of those, that's your business. I'd just advise you to stop reading and move along, before you get hurt. I mean it, fuck off!

Be sure to have a cell phone, pocket compass, slide rule, Victoria Secret catalog, a Pavlovian response, several butcher's aprons and a pint of vodka at the ready.

Waiting is the hardest part. Between your arrival at the bus stop and the time the bus actually stops for you, you must remain vigilant. Men, scratch your balls frequently to discourage conversation. Ladies, say to everybody that approaches you, "I have very advanced syphilis!" in a loud voice and spit on their shoes. 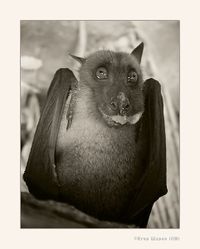 Everybody will leave you alone if you look like this.

Don't waste time joining a cult or break dancing. Cross your eyes and look deeply into your soul. Eliminate the icky things, and keep the nice things in a box, over there by the credenza. Posting in an IllogicoPedia forum may alleviate feelings of guilt temporarily. Be sure to visit your nearest magical healer person withing four days of exposure.

Physically attacking people should only be used as a last resort. You may find yourself outclassed by a potential opponent, in which case, you should stand down and mutter about their mother mating out of season in the Klingon language. Another tactic would be to immediately join the Peace Corps.