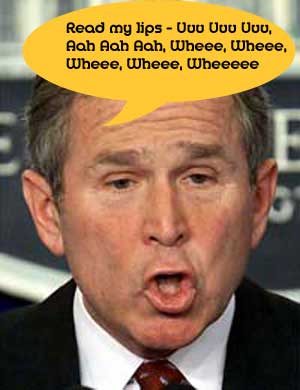 Hello, Mr. Bush, and thank you for entering the Illogical Zone for a short interview.

ILLOGINEWS: So, Mr. Bush. You were our President for eight years. What are your reflections on your serivce to our nation?

ILLOGINEWS: Indeed. Speaking of this, what do you think reflecting on your attempts at a War on Terror?

ILLOGINEWS: Sir, I asked what your reflection on your performance on the War on Terror.

DUBYA: Oh, little feller. I dont no bout dat. Chehney took care of it. I was to busy clern brush in Texas.

ILLOGINEWS: Okay. So, what do you think about the economic mess and your role in it?

DUBYA: I failed eeeconomeics in high skool and i have no idea what eye did, but i no da rich got tax breks.

ILLOGINEWS: All right. You never found Osama. What do you think about your successor's effort?

DUBYA: He's a clozet marxiest frum keenya in china and cant run a kuntry at al. give me a flub nuggert.

ILLOGINEWS: After your presidency, you wrote a memoir called Decision Points. Can you tell me about it?

ILLOGINEWS: So, any closing remarks?

ILLOGINEWS: Good night, Mr. President. Man, what a guy. Screwed us over for 8 years and can't spell a word right. For IllogiNews, good night. Fnurdletoot!