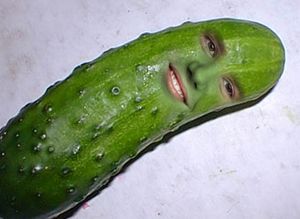 Miracle: The face of Justin Bieber on a pickle. 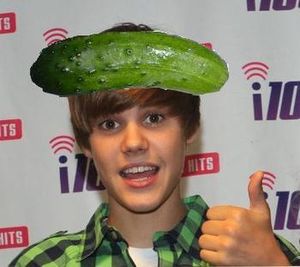 Miracle: A pickle on the face of Justin Bieber.

Recovered from the deepest, darkest corners of YouTube by some musical-type person, this mismatched soul went on to sell literally several albums. Not his albums, mind, someone else's albums. His own albums are sold by someone else. Justin Bieber's albums are used as torture devices for the most evil of criminals to ever live.

Justin Bieber's intellect is often questioned. He doesn't know what "German" means, nor does he understand the concept of rotating glass doors. Hmm. This leads one to question the true nature of Justin Bieber.

Justin Bieber has produced many philosophical writings, all of which are available as a ringtone. His works are too many to name in a stub-like article such as this one. Why, doing so would be silly and nothing more! I detest the very idea! Hmmph!

As would doing so here. I can, however, tell you that Justin Bieber invented fashionable androgyny, like, way before it was cool.

Sometimes Justin is seen eating. I wonder if he eats roast beef..... Wanna play duck, duck, goose? You're IT! Cervix.