IllogiNews:Squidman and other exotics take home the scraps 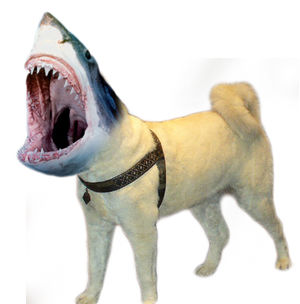 THIRD DOOR ON THE LEFT, Down the hall - A huge collective gasp swept the streets as it was revealed that Squidman, among other exotic "super/duper/splendid/splenda" heroes, was rallied up in a massive group collaboration of candle-making, outlawed in his apartment building. Squidman, a heifer in disguise as a man-shaped radioactive squid with "far-from-super" powers, was held responsible for the inherently illegal glowing green liquid oozing down the sides of the building.

"I'd love to take responsibility," he was quoted saying. This move was obviously a conversational equivalent of a buffer solution, used to keep the acidity of the conversation in a specific range, allowing it not to get too sour or bitter. Even though it did get quite bitter.

S. Hark, Squidman's side kick and canine pal, developed an anti-degenerate counter base that eliminated all evidence of the candle scandal. He was imprisoned for an undisclosed amount of time.[1]

Other Splenda Heroes rounded up in the extravaganza include the unheard of Match'm, Blop Drop, and Ray Ban'd, among other indie heroes and heroines.

Assorted lawyers, loan sharks, and the like jumped on the opportunity not only to make money on legal loopholes, but to purchase the illegally produced homemade candles at an extraordinary discount in exchange for legal services.