The IllogiBog is open for business 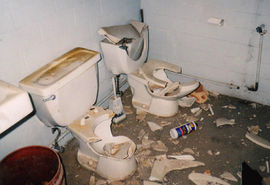 The Illogibogs, last Friday after Seppy had a super spicy vindaloo.

The Illogibog is Illogicopedia's communal toilet. It frequently smells, though more often ceases to exist due to Illogiland's bizarre existance continuum thingymujig.

There is no flusher. One must spit in the toilet until it flushes itself. Thus, the bog has lead to a number of deaths, notably Evil Weevil and Big Ronnie McMonnie. The Illogiment denies these deaths ever occurred, however, covering it up by claiming such a toilet does not exist. And, officially, it does not. This article is off the record, yeah?

Can be used to apply cornplasters, though watch out for wild Iandowies, strange creatures that sometimes live beneath the toilet seat.