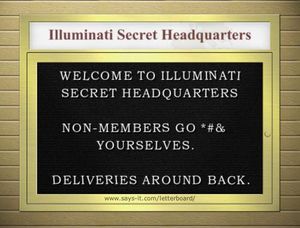 The Illuminati is a respected group of pious, charismatic and philanthropic white men who's mission is to take over the world by any means necessary. Famous members include Jethro Tull, Dick Cheney, Vladimir Putin, Ringo Starr and Issac Newton.

Rituals include scrotum ironing, applesauce head dunking, smoking hashish laced with the ashes of Josef Goebbels, eating food made by Herman Goering, fishing with a several heads of Abraham Lincoln, and face slapping with trout and smearing Communists with mayonnaise.

They eat only crunchy foods and tease scorpions for fun, and they have incredible 500+ members of pajama parties every night.

The Illuminati also rammed Harambe into an iceberg, shot the Titanic, faked 9/11, feigned the Hindenburg disaster and did the Moon landing. They believe that our Earth is inside another world and that we are aliens from another universe trying to spoil it.

= never go shopping when your butthole is itchy[edit]

The lights are off. The window is open. An emoji the size of your open hand circumnavigates your father's laptop computer screen, glitching as it slowly blinks at you with an unwavering certainty. Downstairs, the mirror is stained with makeup and upon further investigation you discover the faint aroma of Sting from The Police. A jack-in-the-box had been placed inside the flour bag in a daring suicide mission. All of the brushes lay in a line, tainted with hair gels and dyes which lasted for all of three seconds. Thankfully, the white bicycle remained untouched. But then the emoji explodes, causing the computer to automatically play Minecraft on its own. The door keeps and won't stop slamming itself over and over again. On the TV, the blue face from Blues Clues and Nick Jr. looks angry, and then vomit comes out of the screen. A bunch of rocks rain from the ceiling fan and the refridgerator falls over and spills everything; the sink is on fire and it won't stop drooling.

You cast a glance around the area and conclude that the perpetrator must have been somebody in the room. The caretaker faints in her armour of loose kitchen utensils. A cutesy all-seeing eye watches down upon any intruders, closely followed by the exclamation point. Interestingly enough, the exclamation point you've now reached is that you've finally discovered the culprit. The caretaker faints again. Modern feminism slowly crumbles. But then the BBC helps her buy a new blimp and throw bananas at the giant potato to seize it so Americans can't be spelling Nazis or shiny cowards about the election.

They released their EP (which stands for "evil plan") recently, entitled Please Don't Stop the Sabotage (We Need More Members).