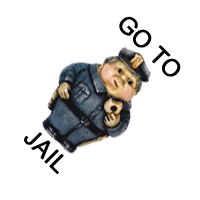 The Polite Force randomly go about their business sitting on 14-year-old ducks and shooting anyone that looks like they have used Uncyclopedia.

The Police can also be seen on late night ITV on Cillit Bang adverts subliminally jacking off.

The Police like to patrol the streets and arrest people who don't like them for no real reason, especially if they've been drinking or smoking weed. The Police enforce the law very well. Do not question them! And don't do drugs kids!

“Every step you take... every move you make.. I'll be watching you.”

~ A corrupt member of The Police