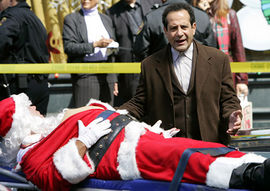 In some cases, snipers are employed to take out particularly violent insantanatics. Santa boy's going down for a loooong time.

Insantaty is the process of becoming a superinsane Santa-like dude. Sufferers of this affliction will note that their stomach swells to such gigantic proportions that, without proper harnessing, their guts may very well explode all over the living room carpet. Next, they develop a delusion that they can walk through walls and even fly when in actual fact they are humping the carpet/dog, or sometimes a combination of both, which is essentially just a very fat shaggy dog made of fluff and found at DFS. This article would have listed details of similar past incidents, but Shaggy Dog stories are prohibited.

Insantaty is incredibly infectious, and can be caught simply by sharing the same air space as a sufferer, though more often it is gained in exchange for goods or currency. Because of its high infection rate regular patrols are carried out by qualified mental health officials, often tracking the disease to the inside of bank security vaults. The Base for Mental Unhealth proudly boasts that millions of dollars have been quarantined in this way. To avoid contracting the disease, it is advisable for potential sufferers to refrain from eating discarded Big Issues, no matter how tasty they may look.

The individual will be compelled to walk to the nearest Iceland supermarket. This is not to buy a Santa costume or other Christmas paraphernalia, rather an enraged attempt to kill that annoying woman from the adverts. When they realise Kerry Katona is not there, they proceed to go on a mad rampage, ploughing down garden fences, foaming at the mouth and screaming "Ho ho ho! Get me some blow". It is advised to steer clear of an individual in this state as they are likely to devour you, mistaking you for a large Christmas pudding or something.

Later stages of the disease[edit] 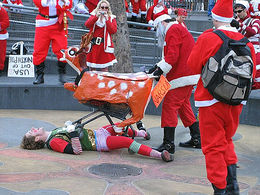 A group of Insantanatics converge on an innocent elf shopper in Tesco car park.

At the stroke of midnight, the sufferer will attempt to scale buildings in a bid to reach a chimney to fall down. Nothing will stop them in their quest: they will climb large flats and even castles in an attempt to find a chimney stack. If their search proves unsuccessful, they punch a hole in the roof and fall through that instead. Unfortunately, the latter is becoming all too common as more and more houses are built without chimneys, meaning the modern insantaty sufferer is doomed to a nasty, electric fire-related death.

Finally, the deluded individual develops a craving for mince pies and sherry which makes them dress as a Santa Claus and rob the pie shop. Unfortunately for sufferers, the falling adrenaline levels lead to the unwanted symptoms of incarceration, which lasts on average 6 months until the sufferer is released after numerous failed probation attempts - another noticeable telltale sign of insantaty.

This, more often than not, results in the side effect of death. Many consider this to be a small price to pay for a mince pie-based obsession.