Not to be confused with Isaac Newton. 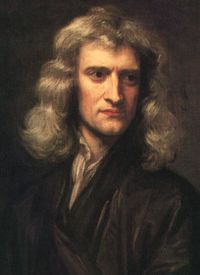 His father often spoke fondly of Issac at the pub, talling all who would listen that Newton was "born with that stick up his arse."

Prescient, inventor, astrologer, alchemist, mystic, poseur, lug nut, mathemagician and polymath Issac Newton is one of maybe three or four, or at most six, great, big, huge minds of all time. By age three he was widely recognized as a baseball prodigy in Bacon Smell, home village to his birth. His predilection for copulating with local livestock got him in big trouble, thus he spent much of his childhood grounded and restricted to his room.

During these periods, young Issac would daydream, conjure demons and read prolifically. In the 1500's, that meant there were more than 2 books in the home. At age 6 he invented probability and statistics, presumably to live out his passion for the sport of baseball vicariously, through obsessing over stats. He invented and played fantasy baseball with his imaginary friends, Froderich and Petunia.

Demons patronized his dorm room at Oxfard University, mainly showing up for his legendary skill with the still. It was said that the Duke of York once paid him 50 times the going rate for specially designed beaver entrails flavored-gin, with which he planned to ply the King of Prussia, seeking the favors of his toes. No one knows what any of that means.

There is an argument which rages, even still today already, as to who invented what we now call calculus. Like many discoveries and inventions, there was often a co-invention where the inventors independently and unknown to one another came to the same conclusions. It seems a German fellow named Ludwig Lieblich or something, came up with a calculus which bore amazing resemblance, in many ways, to the contemporary work of Newton.

For every ook, there is an equal and opposite reook. Issac Newton said this during a night of debauchery to his manservant.. Prickly Thrashing.

Many fanzines have been dedicated to this man of numbers. Each one included a 3D comic which you read upside down. The initial target audience was mathematics and physics buffs, but floundering sales and solid market research convinced management to look elsewhere for readers. Some genius in accounting suggested the Tween Girls market, and it's become a bidding war for ad space. Fortunately it was never published.