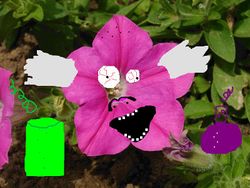 Petunia before going out to kill the gardener.

Mad scientist Petunia lived with his its (her?) parents in a garden in Idaho. It grew up there as a seedling. One day, The gardener came along to water his plants. Little did he know the gardener's wife put toxic waste in the watering can (for unexplained reasons). Petunia grew up talking due to this mishap. Also, Petunia had an IQ 6 times higher than Einstein's.

As Petunia bloomed, she grew legs. Before the gardener knew it, Petunia walked into the gardeners house and put poison that Petunia made herself/itself in his coffee. The gardener died that afternoon. Petunia left the garden and went to college at Stanford. No one payed any attention to the fact that petunia was a flower. She then got a job as a respected scientist.

After the Jews died Hitler shot himself again, but was not to blame for the death of most Jews... Petunia was. She was then exiled to Mars.

With one of the fancy inventions Petunia made she is able to survive there. She lives there to this very day.