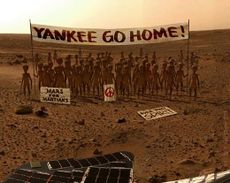 Mars is a planet made entirely of chocolate, caramel and nougat. It has been left in the oven too long, hence its reddish complexion.

Disney made a movie about Mars once, I think.

Is there life on Mars?[edit]

The age old question has finally been answered.

The Answer: There was life on Mars, until Chuck Norris went there.

Is there water on Mars?[edit]

Water on Mars is a conspiracy thought up by those evil NASA scientists to make people think that space is super-special-awesome, when in reality it's a bit crap and quite beige. In short, there is no water on Mars. But if there was it would probably taste like Lucozade.

We Are From Mars.