I, Quagsire, have done it. I have unearthed the conspiracy plaguing every nation on planet earth. His name pops up in People Magazine because of his mediocre talents at acting or producing. But what he should really be known for is destroying every thing we cherish. His name? Mel Gibson.

This is a truly twisted man we're dealing with people. He's actually 142 years old, and his birthday is April 14. For history geeks, that plants him at being born on the same day Abraham Lincoln was assassinated! Suspicious? I think so! The way it works is his mother had terrible stomach cramps and went to the bathroom, unfortunately excreting the greatest plague of all time, next to all the years of Chuck Norris NOT existing. He snuck out of the house while his panicked mother contemplated the loss of mass in her tummy region. He then stole the only ever existing prototype of the "Hyper Sniper" and shot Lincoln, and framed Lee Harvey Oswald.

Next, he took out Archduke Ferdinand and started directing and started "The War to End all Wars." His murder of Archduke Ferdinand was immortalised by the band Franz Ferdinand in the song "Take Me Out." When You play it really, really loud, it says "Take Mel Out" And in another chorus, it says "Mel Gibson says I know I won't be leaving here, with you." The facts have been there all along. He also was the brains behind the murders of Malcolm X, Martin Luther King Jr., and Smoochy the Rhino. Remember Osama Bin Laden? He's hiding in America, and that's just his pen name. His real name? Mel Gibson.

Lastly, Mel Gibson now owns 69% of the nuclear warheads in the United States. He also ate most of the enriched material in one to make himself mutatedly immortal, then sold what was left in a warhead to North Korea, explaining why the nuclear blast was so small when they tested it out.

How We Can Stop The Madness[edit]

To support the cause to have either: Mel Gibson kill George Bush AND Dick Cheney OR destroy Mel Gibson with Dark Matter, go to the "babbling" page of this article and tell us which you support!

Thank you for understanding this grave threat, and I hope you all raise Mel Gibson Awareness in your town 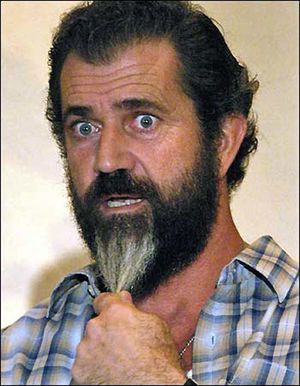 Our Antagonist himself. God help us.

They're back, and supporting Mel Gibson. Now, Mel Gibson has the support of North Korea, The Green Goblin, the giggling clown and space pirate from Scooby Doo, AND the International Clown Union Of Zambiaticsklurglesklechineggia!