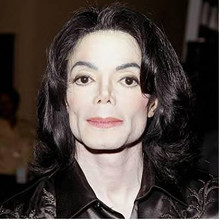 And that, kids, is a bad advert for death nose abuse.

~ Jackson after a McDonald's binge

“Only in America can a poor black boy grow up to be a rich white woman.”

Michael Jackson purchases his replacement parts at Kwik Fit. Your mum shops at Michael Jackson. Oh yeah, he sucks at singing too.

Michael Jackson likes touching Ikea products and is proud of it. He also is the creator of Sherb Blub Juice and the suit he wears. He calls himself Barney when he wears it.

He also owns the rights to all the old Beatles records. So, don't mess with him, man. Unlike Two-Face, he was not scarred in a vat of acid, but killed by plastic surgery. He tried to sue the doctors but since they were wearing face masks, he couldn't ID them, so he sued the whole hospital for wearing face masks, saying if they mess up then no-one can ID them which led to all the doctors catching bird flu!

So, Michael Jackson shows up at the Pearly Gates and Saint Peter is all like, "So ... you're bad, huh?"

Ol' Pete kicks him out of heaven without waiting for a reply. So, he wanders down this dark desert highway with cool wind in his hair and eventually checks in to the Hotel California where he can check out anytime he likes, but he can never leave.

IllogiNews has a story about Michael Jackson:
Michael Jackson is Alive!
Retrieved from "http://en.illogicopedia.org/w/index.php?title=Michael_Jackson&oldid=272587"
Categories: