Whoops! Maybe you were looking for Donald Trump? 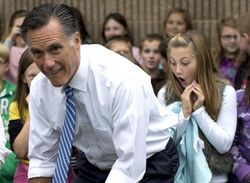 Romney farts in a girl's face, who was supposedly one of the '47%'.

Willard Bartholomew Q. E. Pluribus Matthew "Mitt" Romney was formerly the governor of Massachusetts, and currently seeks the Officious Office of Promiscuous of the United Steaks of America Amercia. He loves, no hates, no loves abortion and ObamneyCare! He resembles some dude with slick hair, but he is really a chameleon; no one knows what position he will support this very second. Romney is rumoured to dye his hair with oil from BP Gulf Ocean spill.

He reportedly uses dollar notes as toilet paper, and is a lifelong friend of the guy from the Monopoly board game.

Romney was a result of the Grand Old Party's Rhino Experiment. He was brought up as a Mormon, therefore committed to the ideal that Jesus will return to earth in the future as a mildly obese American. Mitt refused to believe in Santa Claus throughout his childhood, due to the character's "socialist wealth-sharing motives", and "outsourcing of Amurrican jobs to Lapland, a notorious ally of China".

“I believe abortion should be safe and legal”

“I am officially pro-life”

Romney is used to pandering to get votes of the independent minded (literally, for those whose minds left their brains). Therefore, he changes his mind a lot.

His 2012 presidential campaign is focused mainly on the fact that daylight hours shorten in autumn and winter, something he claims has got worse since Brock Obama took office. His flute-playing skills have earned him support amongst woodwind instrument players, with his rendition of the 'Ghostbusters' theme tune at the first Presidential Debate going down well with voters.