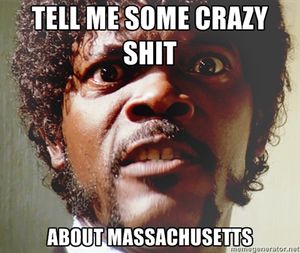 Edgy people want to know about the Bay State.

Massachusetts is the leader of the confederacy of 5 North American states known as "A Newer and Better England. Most inhabitants believe the current state of estrangement between itself and the United Kingdom is a temporary situation, clinging to this delusional sense of patriotism like apocalyptic cult members to a bat shit crazy idea. 78 Major American cities began life as polyps grown from the side of Boston, the state capital and prolapsed colon since 1792.

Unlike Alaska, Massachusetts has no flaming frozen confection named for it. The closest thing that comes to that would be "Boston Cream Pie". It's not even a pie, really. It's a cake with vanilla pudding between two layers and a chocolate icing on the top.