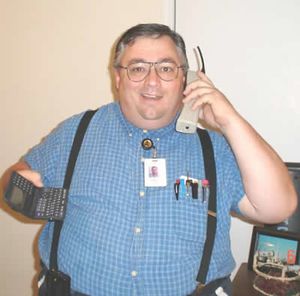 I is a Nerd (actually I am more of a geek). PWN'd Nerd pwn n00bs. o yeah thats right me 1337h4xx0r. u n00b. Nerd likes things like comics, action figures, computers, etc. Geek and nerd can also be used almost interchangeably.

Nerd Hell is any place where there is no electronics, computers, comic books, action figures, or pocket protectors.

The world is crawling with nerds. Millions of them. Nerds and geeks can be found in every country, every state, province, from every big city like New York and Tokyo to the smallest small town in Mississippi. All of them share one thing in common, their nerdiness. Most of them are hackers. All of them speak Klingon and have every line from Star Wars memorized as a default. What they do not have in common is their nerd style. There are computer nerds, comic book geeks, Wikipedia nerds, school nerds, video game nerds, Sci-fi nerds, and even Illogicopedia geeks. Those are just a few species of nerds. There are plenty more out there. No two nerds, geeks, or dorks are alike, except for twin and triplet nerds. If you are a nerd or geek and your twin is not, then you have a problem Better yet, THEY have the problem.

Most nerds are either extremely fat like our buddy FatNerd up at the top of the page, or very short, skinny and weak. They have pocket protectors, snot hanging out of their nose, and thick, square Harry Potter-like glasses (some Harry Potter geeks have actual Harry Potter glasses), usually with a broken lens and a taped frame. They usually smell bad, but besides that and their snot, they are obsessed with hygiene. They always carry around big books and fancy techno-gadgets they made in their basements.

Geeks are usually just like nerds, except they look more like normal members of society, although both hang out at comic book shops and action figure conventions in their home-made costumes and both can recite all of Captain Picard's lines from The Next Generation. Geeks may look normaler than nerds, but still scream "I am a geek. Please don't date me" and are actually more obsessed with their specific object of worship, although they tend not to tell anyone like nerds do.