For those who can't handle the real truth, the spinners of fake truth at Wikipedia have a thoroughly boring article on Darth Vader.

Darth Vader, formerly known as Anakin Skyrunner, was a famous Sith lord. After an incident involving a lightsaber and lava, Darth Vader lost all his limbs and got badly burned. He was left for dead by his former friend Obi Wen Konobi.

When Emperor Palpatine found him, he was rushed to The Hospital For The Weak And Foolish. There, he under went plastic surgery which had no lasting affect. Palpatine rushed him back and ordered the mentaly ill doctor to operate on his friend. The operation took five minutes. When Darth Vader walked out of that ER, he was a new man....wearing a shiny black suit!

Shortly after this Darth Vader made the cut for Dancing With The Stars. Although, his partner was an obese Japanese tourist, they won the gold! In his later years, Lord Vader tried to rebuild the troubled relationship with his son,Luke, which ended up with Darth Vader's death. 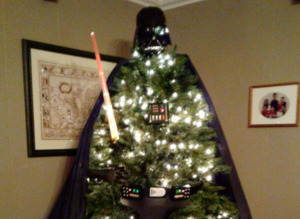