No Scope: The Battle of the Halo 3 Gods 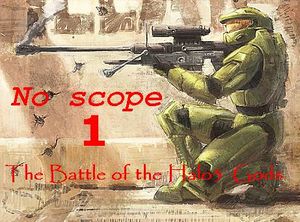 Between the gods and the Halo gods, there have been many no-scopes. Even Jesus could no-scope a bit. But the real no-scopers are the ones that get it on film. Even though most videos showcasing skill (Montages) are deemed unworthy, most are very well in showing off like "sticking people" and "no-scoping". The History of no-scoping is short and started when a Halo 2 player named l3374life headshotted another player with a sniper without a scope. The no-scope was born.