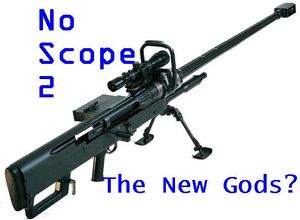 When we last left our peeps they were recovering from a hard battle of Halo 3.

Later that day ginonater is pacing around Cold Storage pondering the situation.

The lobby was opened at 7:59 EST and all of Da Snipaz showed up but Jauqe wasn't there.

T3CANOLIS: God dammit Jauqe, you french son of a bitch.
Snipee You're just upset cause you know your gonna get pwnd.
gino: Man this sucks...
m45t3r: I don't care, we'll do it anyway. Once it's eight o'clock... LET THE SNIPING BEGIN!

The battle went on for 5 hours and 55 minutes before anyone died.

T3CANOLIS walked into battle and dodge many sniping attempts. He ducked behind a rock and shot CommanderSnipee.

m45t3r came up and was going to assassinate gino. BANG! m45t3r fell to the ground and Jauqe was standing behind him. Jauqe: Vous avez commencé le match sans moi. gino: m45t3r? m45t3r: We started the game without him.

And so our heroes go on still the Gods of Halo 3...