The Oprah paradox describes a woman who fluctuates (physically, from 8,000,000 pounds to 2.865 pounds). It's a completely logical fact that Oprah is not one person but in fact three people. One being very skinny, one being very fat and another being a midget who has not yet been released to the public. Oprah has successfully been able to manipulate a huge enormous audience through the years with her weight gain and loss. What a way to become the richest woman in the world. Way to go Oprah! 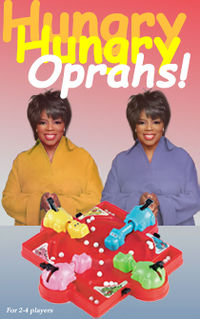 Did you mean Fat Hippo? --Google.

“Hello, everyone! On the show today, I'll *Falls down. and rolls around on floor* Wraaaah! Someone *censored*ing help me!”

The fat Oprah was introduced in more of Oprah's early years to give of the "I'm fat and its OK" look. Everyone immediately loved her. Especially the fat people. Fat people like other fat people.

“Look, everyone! I suddenly became skinny! All I did was switch my body with the one that stays eternally skinny even if I eat mass amounts of junk food! Err, I mean, I dieted and exercised regularly. Heh!”

After fat Oprah came skinny Oprah. This appealed again to everyone. She gave off the "I was fat 2 months ago but after massive amounts of working out and starving myself and spending millions of dollars on personal trainers and maybe sometime if your as rich is as me you can do it too" look.

“I'm small! Now all you dwarfs get a good look and see how there's dignity in being short *Tomatoes are thrown at Midget Oprah* before I go back to elf land for the next hundred years.”

The midget version will bring in even bigger audiences because she will be a fat midget. Which means that she will attract the Danny de Vito loving audiences. Midget Oprah is set to be released in a few years or when she thinks everyone is ready.

Oprah's diet mainly consists of three finely chopped and diced Mexican children. Although the yet to be released midget version likes to feast on the fatter Oprah sometimes but they do not allow him to do this a lot because the fat Oprah needs to stay fat to five the image of fat Oprah.