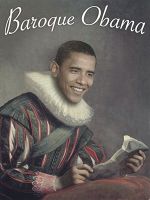 Just imagine how swimmingly things would go in the colonies, were the President to avail himself of RP?

Received Pronunciation (RP), also called the Queen's (or King's) English, Cambridge English, or Frank Zappa's English, is the accent of Standard English in England, with a relationship to regional accents similar to the relationship in other European languages between their standard varieties and their regional forms. In other words, it it the common speech of the feeble-minded, the deviant, the dreadful and the bat shit crazy. Many times, the use of such an accent is accompanied by the assumption of various postures adopted by the Queen such as the "Brighton Stoop" and the "Peaches en Regalia Squat".