Queen was a former Emo band, founded by The King of England in 1970.

For those who can't handle the real truth, the spinners of fake truth at Wikipedia have a thoroughly boring article on Queen.

Brian May was in a fix, he was a washout background singer who severely duffed a solo gig at a party attended by The King, as retribution, May was forced to assemble a kick-butt band to redeem kimself in the eyes of the royalty, or else... he would DIE.

Unfortunately, the only ones who would ever join a band with Brian May were a convicted tax-evader and mediocre bassist Tim Staffel, and a dental student and castratus Roger Taylor, who got assigned to the drums. This is a stupid page.

The logo for "Smile"

But thankfully, their band was not Queen, it became an emo band ironically named smile. Frequently using songs concerning dental hygiene as metaphors for self-mutilation, the band earned only 1 fan in it's years of playing at retirement homes, who happened to by Staffel's "best friend", singing prodigy Freddie Manugiabamaonumaman (Later known as Freddie Mercury. Staffel, angered at the band's frequent failures left the band saying:

Staffel went on to hump a bong, whereas May, inspired, promptly hired Freddie along with someone else no one had heard of, and kept on his steady streak of flops.

Freddie was "normal" to say the very least, and "freaky-deaky" to say something more accurate. Upon entering the band, he promptly took over, demanding that it be re-named "Queen" after himself, and that he be renamed "Mercury" for astrological purposes.

In addition to their previous emo songs, Freddie slipped in an inspirational song entitled "Keep Yourself Alive", a song about Jesus (Click on this blue link), and several songs based on RPGs he was greatly fond of. The album entitled "The Queenly Queen" turned the head of Jack Chick, who was torn on where Freddie's allegiance lie, making songs about both Jesus and RPGs. In the end, Chick decided to judge based on whether Freddie was homosexual or heterosexual. Jack Chick went in to hiding and still does not know to this day.

Queen's next album entitled "Queen the Second" was entirely about RPGs. The fact that it sold better than anything Brian May had put out before effectively gave him a mycordial infarction, preventing him from working at all on the third record, which Freddie entitled "Sheer Heart Attack", in May's honor. The album was another surprise hit, mostly surprising for May, who, when he returned had no idea what weirdness had occurred in his absence. The other 3 would not tell him, later saying they didn't even remember.

Then there was the problem, even though Queen was selling better than they ever did before, it was still less than minimum wage. Not to mention the King of England was still on Brian's tail!

In an attempt to save himself, the band attempted one final stand at the Le Opera Populaire, playing for tips, singing such songs as "Death on Two Legs, (Dedicated to The King of England)", another emo song "Love of my Life", the John Cage tribute "'39", and finally "God save the Queen", a 100% improvised extended guitar riff.

Booed offstage, Brian May broke down into tears. Finally, with the King's royal guard just behind them, forming into a firing squad with the intention to blow them away as soon as the audience ran out of fruit, May inspired them all to take every ounce of emo they had left into one final goodbye song, so they could at least go out like Dimebag Darrel.

Their final emulsion of emo was quickly entitled "Bohemian Rhapsody", for lack of a better title. It quickly became really, really popular. Like, ABSURDLY popular.

The magical combination that resulted from May's desperate guitarisms, Taylor's falsetto background singing, Freddie's magical singing voice and lyrics, and Deacon's managing to fight off the firing squad backstage for the full 5 minutes, shook the audience out of their bitter apathy and actually impressed people. The song convinced the king to call off the hit, and inspired him to become a queen himself! Ecstatic about being a star and not being killed, Brian May wrote a song on the spot called "We are the Champions", which he sang on a loop for the rest of the night, with the audience following for every minute. From then on, all of Queen's songs became about pwning people, buying hookers, and being millionaires. The new outlook attracted an amazing number of new fans, until Freddie Mercury died... 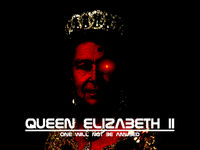 An example of a killer queen.

Perhaps the most controversial song during Queen's golden years was one that first seemed to be yet another song about "Queen" being a "killer". But as the song progressed into it's first word, it became apparent that the song was not mentioning a band of four men, but of one woman;

The common title "She" often refers either to a woman, or to a sweeeet lawnmower. It became apparent as the song progressed directly further, that the song was indeed referring to a woman;

"She keeps her Moet et Chandon"

This is apparent, as lawnmowers traditionally did not keep Moet et Chandon anywhere, as they did not have it, preferring more fossil-based drinks, such as gasoline.

Well, now that the main controversy that the song is actually praising someone other than Queen is overcome, we can safely skip over the rest of the song and make conclusions. When taken as a whole one can plainly see the song's violent imagery and simple yet intense iamb. Of course this, along with the title, eliminates the possibility that "Killer Queen" was about buying hookers either, as hookers are supposed to love you. Through process of elimination as brutal as that detailed in the song itself, only one analysis is feasible. That "Killer Queen" is in fact, about a female assassin.

She keeps her Moet et Chandon
In her pretty cabinet

The first two lines establish an uneasy feel for the rest of the song. The Moet et Chandon in fact refers to an extensive library of poisons that the title character keeps on hand.

'Let them eat cake' she says
Just like Marie Antoinette

A throwback to one of the most evil people from all time is where the killer queen gets her catch phrase, proving that "U can have your cake, and eat it 2"...

A built-in remedy
For Kruschev and Kennedy

An ominous remark and the #2 source of controversy in the song, behind the possibility of crossdressing antics by band members. Obviously, Kennedy and Crush-nev were "remedied" out of office. If one could suppose Queen based their song off a real person, it would mean a vital connection to the seemingly unconnected events. When asked about this very thing, Mercury simply remarked:

“Even the nicest women can be such bitches, ya' know?”

~ Freddie Mercury on Krush-nev and Kennedy

At anytime an invitation
You can't decline

The "invitation", of course, referring to your inevitable death, most likely to be delivered by the titular character.

A set-up to the next line, delves into her deceptive disguise talent, making her able to blend in to the most debonair parties in order to pick-off hard to reach targets.

This line breaks out of the form established by the previous verses. Here the singer seems to actually be complimenting the "Killer Queen", not expecting to be cut off when he is lulled into a false sense of security and killed!

Self-explanatory. She is the female Chuck Norris.

Ooh, recommended at the price
Insatiable an appetite
Wanna try?

Another verse that breaks off early. It goes to suggest that she enjoys her job immensely. If you try to escape her, you will fail.

She even took the identity of a Chinese man, shortly after she killed him in a Geisha house.

The "character" is very dedicated to her job, she does not want such vain things as perfumes and does not need cars even for such things as drive-by shootings. She needs to physically stay at the top of her game.

This is repetition of the last time this verse was said. Look how it puts even more emphasis on the verse...

The Queen is impulsive in her methods, and can kill a target as fast or as tortuously slow as she wishes.

Then, just as it seems she is slowing down...

To absolutely drive you wild, wild...
She's all out to get you

She kills you!!! She is out to drive you insane until she finally puts you out of your misery by putting you into more misery!

The same as last time and the time before that that the chorus came on... Only now it's TRIPLE THE TROUBLE!!!

Ooh, recommended at the price
Insatiable an appetite
Wanna try?
You wanna try...

Like the same time the verse was said, except now a fourth line is added, a grim invitation to the listener to try and take her on. But if the song is of any indication such things are useless and the listener is only digging their own grave...

In a way, even though the song came well before Queen reached the top of their game, it foreshadowed the stunning surprise that was to await them next, as even they would meet their match, just as The Killer Queen undoubtedly did eventually...

...NOT! *Blamblamblam!* FOOLED YA'! It was meeeeeeee all along!

In all the people Queen owned, the only one they failed to own was Flash Gordon. In Flash's unstoppable excellence, Queen promised Gordon to make a song in his honor.

I mean, the band's still around, but it's not like it matters...

Any way the wind blows...