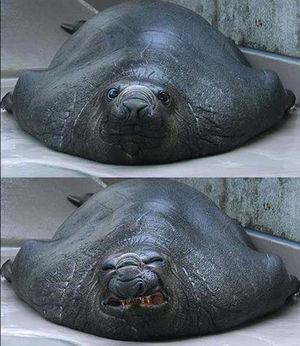 Above is before, below is after.

~ the Kabbalah on what's what, exactly.

Seals do not have blowholes, like some lucky sea mammals. They are chained to the same breathing cycles and restrictions as the dugong, the manatee, and the moose. Seals used to have legs, until bats ate them. Then came the mustachioed and much-maligned fuseliers, with their wands and fancy candies, all swishing up the street like they owned the place.

In 2009, with huge funding from the Pentagon slush fund, bat-seals were invented, with the intention of populating Tasmania with more weird-looking animals. In deference to their status as a nation below the equator, defense contractors at Lockheed even engineered an optional marsupial fitting, with teflon pouch and retractable nacelles.

A special division of the Marines was formed to service attack bat-seals in 2010, and their first mission was completed successfully on February 16, 2011. A witness described the secret mission as having the effect of stupefying troops, with some cases of experienced, hard-fighting soldiers soiling themselves for hours after the event. Military analysts were confused as Marines wielding bats broke cover and charged the bat-seals. Apparently, there was a mission within a mission, as is often the way with fanged meats.

Behemoths and rusting hulks jostled for attention angrily, and the train doors closed with a whoosh.