IllogiNews:Bats are eating my legs 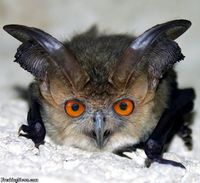 Bats, or more precisely bat-like creatures are eating my legs. Here's one now.

Repudiate my claim, if you feel so compelled, but I'm telling you that bats are eating my legs. "Save it for Hogwarts, Hermione", I heard from a sagacious pundit. Bastard. I love that guy. He tells it like it is, and isn't.

My doctor says I have glaucoma, with a wink and a nod. I won't dispute the facts. In fact, like Deepak Chopra, I believe in some total bat shit loon crazy shit. Hey, go to Utah and stand on a corner someplace, rant about how dead Mormons each get their own planet... see how long you last.

OK, they're not really bats, but you must admit, they're bat-like. With owls eyes. Eating my legs. I wonder where they'll stop. The picture shows only one, but believe me, there's more than one. Several, at minimum.

So why isn't there a prodigal daughter in the Bible? No, really. It's because the very heart, the dark heart, of monotheism is the perpetuation of Meme clusters across time and space. Across generations, you see. And what does all this lead to? Nonetheless, I believe that bats are eating my legs.