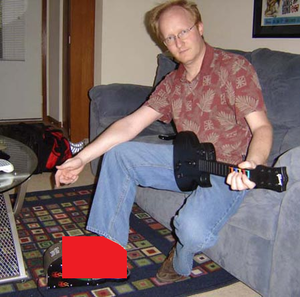 Square foot disease (commonly known as foot² or as block foot disease) is a bacterial infection that occurs most often in the feet, turning the once useful appendages into limp rectangular prisms. The disease is very painful and quite fatal; a fatality rate of 67% keeps it at one one of the deadliest foot-related diseases on the planet.

Symptoms of square feet include the following:

If you or anyone you know experiences any of these symptoms, especially the third, please contact the Foot Control Center (FCC) immediately. Don't call the doctors, their medical opinions don't count with square foot disease. 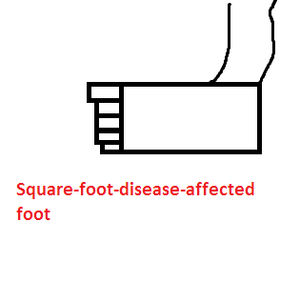 Square foot disease is devastating to victims and their families. Most victims cry for several minutes, and some even go to the point of suicide when the doctors bring them the bad news. This can be associated with the fact that they go to doctors; a grave and terrible mistake. You must immediately contact the FCC, as they won't make you sad.

Most victims experience extreme pain, followed by a lack of feeling in their feet. This is because the nerve cells are transforming into rectangular prisms, and painful and destructive process. Once the foot is a rectangular prism, it is effectively useless. They, however, make fashionable alternatives to shoes.

In 1976, an outbreak of Square foot disease struck in Texas, when 300 people all had their feet turned into limp prisms. The disease was a mutant, making all of the peoples' feet perfect cubes instead of rectangles. The FCC had no cure for the disease, and, as such, everyone was quarantined and killed. Er, I mean, they all took a nap. Or something

Random numbers that are supposed to be statistics[edit]

Every year, 7692 people are infected with this disease. Of that number, roughly 823 die within three days of infection. 57.8% of those who die within a week had a German Shepherd, helping scientists link the disease and the dog. These 37 numbers are completely pointless, as 91% of statistics are made up. Of those 91%, 90% are crap. Please refer to Sturgeon's Law.