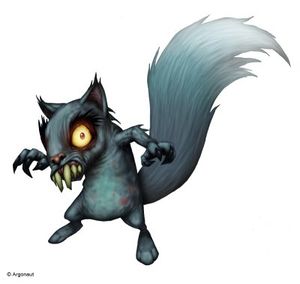 I like squirrels, because they're cute and fuzzy and they gruesomely chopped my enemies to bloody bits huggled me and let me pat their adorable little heads.

A squirrel is a fuzzy, small creature that eats nuts and spreads diseases. It has an unexplained long tail, which actually picks up programs from BBC. It has big, black eyes which look like they were glued on there. Squirrels also have a habit of chainsawing all those who dare oppose it being the most cute, innocent little rodents it's phsically possible for them to be.

Squirrels in the media[edit]

There is a squirrel wearing a spacesuit in that fish show, SquareJim. A squirrel is one of the fuzzy creatures in The Happy Tree Friends.