Suspicious Goat Lurking in the Corner

~ Observer of the goat

Known as one of the "most shady figures of all time", the Suspicious Goat Lurking in the Corner is not one to mess around with. He lurks around in the dark corners of places. Where exactly? I don't really know, in fact, I don't even know my name! That's why people tell me I'm stuck here at the mad house... but I don't believe them. 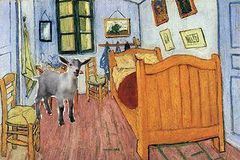 He may look innocent, but we know he does evil things.

The goat is quite the character, if you get to know him he actually isn't that bad of a guy, he's a whole lot worse. He has a bunch of stale quotes he commonly uses, onion breath, and he makes you feel like someone is watching you. Mainly because someone is. He has a crew of, well, I don't know how many men, but none of that matters, was does matter is the fact that they are waiting in the other dark corners and are ready to jump you, when necessary.

Most people don't even notice he's there.... until it's too late. By the time they realize the animal lurks in the corner, they've already been killed, knocked out, or turned into a delicious human soup. No one knows exactly how he does it, he just... does. No one questions this, however, because if they did the goat would find a good way to kill all of the plants in your garden, before you could even get home to stop him. And if you tried, he would move to another corner and wait there.

Everywhere you go, he's there, secretly, watching, scheming, and thinking of ways that he could prepare your baby's flesh in a delicious five course meal. He would never actually take your baby, just your pet dog instead. If you catch him in the act, he says something like "It's flu season. Just taking the precautions, ya know?" or "I was seeing if he was mine". Whatever you say, you shouldn't believe, because if you do, he get away with the dog and perhaps your purse.

Not what you would expect[edit]

If people ever see him in the corner, they act rather dumbfounded. What would you do if you saw a goat glaring at you in the corner?

Just to be safe, it is suggested you don't hang around a bar or the local DMV, those seem to be his hot spots. Lots of times however, he manages to find his way to a corner of your house. There he waits, and while your not home he raids your pantry and eats all of your rose bushes. One time, he took someone's cat and turn into a paper airplane. Most of the time though, he's in every building but the movie theater, because there is a law forbidding goats to enter movie theaters in the area he prowls for innocent victims.

If you ever see him, he will probably see you, too, but if he doesn't, I highly suggest you run in the opposite direction. His men will catch you, tie you up and cook up for dinner, but hey? It was worth a shot, right?

But the point is: The goat is always there. There is no escape. He will find you. You are doomed.

Unless you shoot him in the head with a gun.