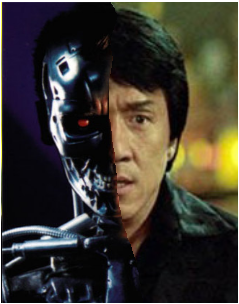 I am da Chaninator. You shall obey my wishes! Now gimme sum chicken noodle soup!

The Chaninator is the greatest robot ever built in China. He can beat up 100 kazmillion ninja pirates before they even say hi-yarr!

Hold Oliver Twist for ransom until someone gives me 20 million bowls of chicken noodle soup!

Transform all my chicken noodle soup into a giant monster and take over the world. Muahahahahahahhahahahahaha-ha.

Not to mention, my super-secret other stage...hehehe[edit]

Activate super-cool powers of pang-kwong-ling-zho... whatever.

Stage Five, The Stage In Which Things Are Explained In A More Complex Way, Or In Other Words, More Than Three Or Less Words.[edit]

Gain powers by eating noodles, such as super-strength, speed and any other power that is preceded by "super".

What origin?, he was built by a Chinese madman with spare parts from his Mercedes. The end. Oh, you mean orange gin? Sorry, i don't buy orange gin. My grandpa says it tastes funny. or maybe that's cause he has no taste buds. Well, meh to you.

Okay...orange gin? Who added that? I told you i hate orange gin and i don't buy it. Why? Because it's single and available.