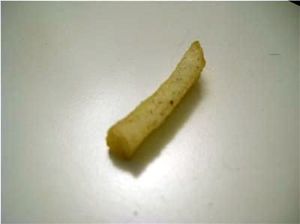 Left at the scene of the crime.

The French Fry Slaughterer is the name of a vicious serial killer who rampaged across London, England, starting in the late 1980s. He used a french fry as a murder weapon, or at least he tried to. He never actually killed anyone.

His apprentice, The Hot Dog Bun Butcher, is still at large in Scotland, where he reportedly bludgeoned an elderly man so much that he "almost noticed."