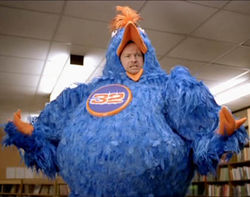 The King of Scotland

Scootland or "That place where there are like people that are, like, Scottish" as the Imericans say, is a Scotlike place where the Scots roam about and generally present a public nuisance. Contrary to popular belief, Scotland is not real. It's a place you go to in your head when you want to see how you're so much better off than others.

The Scots like their sporrans and their kilts. I know this might be considered a stereotype but the King of Scotland announced it isn't. The culture in Scotland is underdeveloped and unsophisticated - all they do is lift logs and drop them in a local swimming pool. The kids scream and run out. Most of them are dead.

Gordon Brown is the typical Scottish hero and mums worship him for his giant sporran.

Cheer up Jack, you stupid hack.