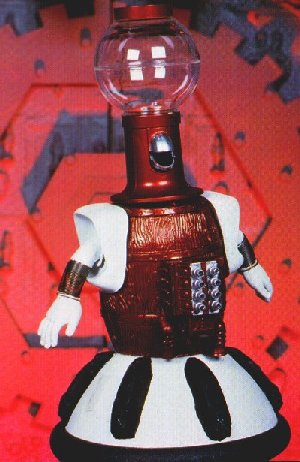 Tom Servo in front of his home in Minnesota.

Tom Servo is a major literary figure of the 20th century, as well as a champion of appliance equal rights. Born as Htom Sirveaux on an assembly line in Cuisinart, France, he fled the country at a young age when appliances who did not conform to government standards were fried at high voltages. He anglicised his name when he published his first major work, the essay, "They Fill My Head With Gum, They Fill Your Head With Lies".

In addition to writing over 14 novels and 72 short stories, he taught English classes at the University of Illinois.

His career was been hampered at times by critics, who claimed that it was unfair for a robot to have been awarded a PhD in Literature in the first place, let alone be granted a teaching position at a prestigious university. Opponents countered that anyone born from the unholy union of a bread maker and a gumball machine deserved any success they could muster.

The prejudice was largely silenced following the monumental Data v. Starfleet verdict on Stardate 42523.7, which granted full rights and privileges of self-determination to all sentient small appliances and derivative life forms.

In the Spring of 1994, Servo was spotted holding hands with English pop sensation Prince. Rumors of an affair were widely reported in tabloids. While appearing on the Today Show promoting his album Dirty Sex Bomb, Prince commented on the controversy: "Let me just say...he's all man under that hover skirt!"

Though questioned about the incidents on multiple occasions, Servo has repeatedly declined comment.

Currently, Servo leads a rather reclusive life in the luxurious bottom drawer of a 3 million dollar nightstand in Minneapols-St. Paul, Minnesota. He lives with his wife, Eva Braun Mixerundblender and their 3 young attachments.