From Illogicopedia
Jump to navigation Jump to search
Whoops! Maybe you were looking for Pink Floyd? 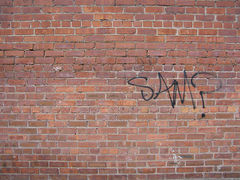 An unfortunate person who suffered at the hands of The Almighty One attempts to communicate with the world via crude graffiti.

A wall is God's way of telling you to "stop right there, barsteward." You can avert this minor inconvenience by avoiding such places as houses, public toilets, castles and other buildings. Should you find yourself in any of these locations, rapidly bash body parts against a wall in order to break it down: if you die in the process, you can always give that meddlesome God a piece of your mind. Or, a piece of cake if you don't fancy spending eternity in Hell - the penalty for doing illegal things in swimming pools, failing to clear up after your dog, not observing zebra crossing laws or breaking down false walls.

Wall plugs can be used to plug holes in walls or to wall holes in plugs. Should you encounter such a plug, do not touch it for it can result in a shortcut to the aforementioned afterlife scenario.

At the other side of every wall (apart from the ones you can see through) are; three clowns; a really fat person in a fat suit; Brian May; a large cheesecake with blackberries; a thousand trees; thirteen times champion of the world Phil "The Power" Taylorrrrrrr and nine point five mathematicians searching for new prime numbers. Incidentally, the .5 of a mathematician had his soul taken away when he called God a 'meddlesome misbegotten dog's bottom' - it was not a pleasant sight to behold, let me tell you.

However, by the time you have moved to the other side of the wall, all the above have moved to the one you were on previously. Scientists have attempted to create a complex series of mirrors to record what really lies on the mythical "other side of the wall" but only managed to create a mildly tasty grilled Tesco luncheon meat sandwich with extra ketchup[1]. As a result, the only credible record of the existence of these people/items is that of Francis E Dec in his personal diary.