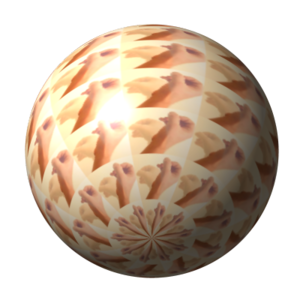 Wankipedia's official logo symbolizing user experience, fulfillment of deeply significant personal aspirations, or something or other. It sounds better when the PR people say it, but they're all locked in their offices with the blinds pulled down.

While originally born from Jimbo's insatiable lust for chick flesh and Larry's desperation to keep riding on Bandwagon Jim, the project has since rebranded itself[1]. It now claims to be a humanitarian effort "to create the largest library of open and accessible pornography the world has ever seen" with no access fees required[2] or other visible sources[3] of funding utilized.

But if you ask me, it's a pervert's dream come true, and a venture capitalist's nightmare.

In the beginning, there were two men: Larry Sanger, and his less talented but better looking future arch rival, the outlaw Jimbo Wales.

While Larry was ensnared by Jimmy's cowboy demeanour and hillbilly sensibility, for Jimbo, it was strictly an arrangement of convenience. He was the Steve Jobs to Larry's Steve Wozniak, and Jimbo was determined to ride that horse straight to the winner's circle.

Their first joint project, Nudepedia,[4] relied strictly on professional models and was an expensive, preening, whining disaster in stilleto heels and loud pink lipstick. Plus, it had a really bad, cheap looking HTML-based logo:

...and a lousy slogan that Jim came up with himself.

Larry, desperate to save their fading relationship, initially only participated in this venture on the condition that it harnessed real expertise, that is, the aforementioned professional models. However, due to the lack of funding it was expensive to procure enough cheap tarts to provide a reasonable amount of content.

For those who can't handle the real truth, the spinners of fake truth at Wikipedia have a thoroughly boring article on Nudepedia.

A number of inventive techniques to maximize the budget were tried, including:

In the end, Jimbo decided that there was more mileage in chasing women in parking lots seeking amateur submissions, and thus the successful business model for Wankipedia was born. 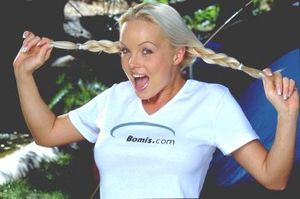 I'm so perky! You make jerky?

“Bomis does not, in any way, shape or form, condone, endorse, or encourage the juggling of mice.[6]”

~ Jimbo Wales on "the incident"

Bomis is a shell corporation of the Wankimedia Foundation. It was created as a means of creating free and original content to post on Wankipedia.

Because of the lack of funding, Bomis employees had to be creative in procuring those much-needed pictures of ginormous hooters and bearded clams. Typically, this involved getting really drunk over at Jimbo's house while listening to Lynyrd Skynyrd, then piling into his pickup truck to go trawling for street walkers. More often than not, the dedicated attentions of a bunch of "good ol' boys" hooting and hollerin' "Let's see some!" was enough to get the shirts lifted and the drawers dropped.

Jimbo usually snapped the pictures himself, while his lawyer buddy Dick Hertz made sure the necessary release forms were signed.

The Wankimedia Foundation is a shell corporation of the Bomis company, or possibly Wankipedia itself. It's hard to tell really. The tangled web of interconnected businesses woven by Jimbo Wales and company has been difficult for experts to unravel, including investigative reporters, tax men, and telephone psychics.

“Jimbo's shady complex of companies and their many-tentacle accounting scheme is more nightmarish than a Wes Craven movie.”

What is obvious is that the Foundation exists to lend more credibility to the dubious legitimacy of what is tantamount to a subjugation mechanism that forces desperate and underprivileged women to feed the insatiable flesh-lust of misogynist creeps.[7] Oh, and it makes for a dandy money laundering tax shelter way to collect corporate welfare donations.

In any event, if you're single, married for over a year, or otherwise alone and unfulfilled, Wankipedia is a great place to surf for an hour or ten.[8]