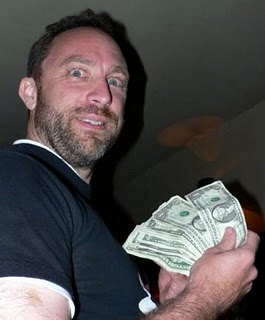 Holy crap, Jim! There's got to be at least 15 dollars there!

Jimbo Wales is the pseudo-affectionate name of the guy that maintains and reads every wiki page everywhere. (Hi Jimmy!) Living a tortured existence in limbo between Wookieepedia and an advertising salesman, Jimbo is often impossible to find in the real world, lest a portal throws him out of the screen so he can present a university lecture on why cititations are so awsum!

As you might expect from his surname, Jimbo was in fact named after the country of his birth: Tajekistan. He has many fond memories of his time there, playing with Microsoft 2.0 and preparing for his work later in life by taking it up the rear from his shady ad exec uncle.