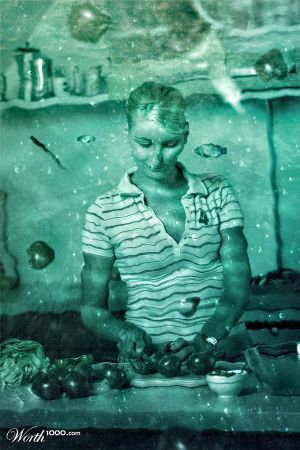 Don't forget to add the yeast.

You would at least think that, if your sink is overflowing, your initial reaction would be to turn off the tap (or faucet, if you happen to be from the land of the free and the ointment). I would not recommend standing around shrugging, and proceeding to yell 'KITCHEN UNDERWATER' in as loud of a voice of a middle-aged woman from Yorkshire as you can muster. As your bonnet continues to be carried off by the wind, all you hear from the nearby hot air balloon is the faint murmuring of 'stop, hat, stooooop' in the tone one would expect from someone who had just finished a floral tea in the park.

The sink is further neglected as the home appears to be flooding, with various household appliances summoned at the will of the incredibly unwilling man with a hat for a face. He resides in the caravan which is located next door - for lack of better wording - and yet he is neither an inventor nor is he famous, but there is a slight chance he could be an Australian ginger with a token Asian friend. This invention, however, was not of his own doing; it was a gift from the upholder of wifely duties.

Floating on the surface of the water, a wild toaster appears. It is somehow an autonomous entity which gravitates toward the source of the disaster - ie. you - despite no longer being plugged in. The toaster seemed to have beforehand been loaded with bread, as two slices of toast are inexplicably ejected as a fine touch to the cacophony of vacuum cleaners and your highly expensive sound system.

The remote was never to be seen again.

As was the kitchen floor.

The kitchen had been drenched in 2 metres of probably-unfresh water. That's a shame.

Next time on IllogiReals: 'What's that Sound? BATHROOM UNDERWATER'.

After one's bonnat was carried off by the wund (I could go on all day about it), he eats chips and fish. Not fish and chips, too mainstream! The refrigerator shouted, 'Ka-klang ka-klang!' I wonder if it was singing to 'Weasel, weasel'. A Bearterflyger sat on the wall to only find more blackness. So the kitchen was under water. Water? Undermilk. The milk spilled. Only one day was boring, just that day. So it was, 'What's that Sound? KITCHEN UNDERMILK!'. Sonk. Fnurdle, eeble eeble eeble...