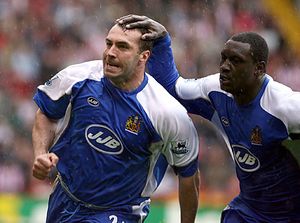 This man is about to be scalped.

Wigan is a place where some people live in England but also Australia. Discovered in 1982 by Sir River Douglas and named 'The Place of Bacon', it quickly established itself as the epicentre of the mondonkey trade.

Upon crawling from the sewers of Wigan town centre, feral turtles found themselves endowed with strange powers which they unfortunately could not act upon as they were dead. The tortoises were found by a small boy and used to throw at buildings, hence the birth of rugby league.

Two of the turtles, Andy Farrell and Jason Robinson, went on to become household names as they were made into washing up liquid and kettles respectively.

Sir Ian McKellen stumbled upon Wigan in 1934, whereupon he stole and ate all the pies. Now, people eat lobbies and small beetles found in skips and newsagents.