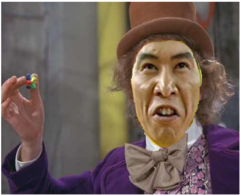 Wirry was born in a sushi restaurant to Mitsune and Teriyaki Wonkaa. He learned about sushi at a very young age. He discovered many types of cool sushi and ran away, to do something.

He opened a sushi factory and made all the cool sushi he discovered. He then fired all the workers because they were too busy with their Pokemans. He replaced them with the Goomba-Loombas, who didn't know how to play the game.

He invited five children who won the Golden rice ball challenge. They entered his factory, but only one got the prize, ownership of the factory.

In his own words:

You can suck on them all year, and they never get any bigger! Neither will they get smaller!....Oh wait, you're sucking on snooker balls... well ain't mah fault them's tastin' very gudd!