Anthropology is the scientific study of anthropods through the lens of social Darwinism. These rancid little bastards, long the bane of mankind, live in most any climate and location that humans do. In fact, the little parasites will pull up stakes at the drop of a hat to follow a promising looking band of humans, hoping to scrounge a handout or perhaps a donut dropped onto the pavement. 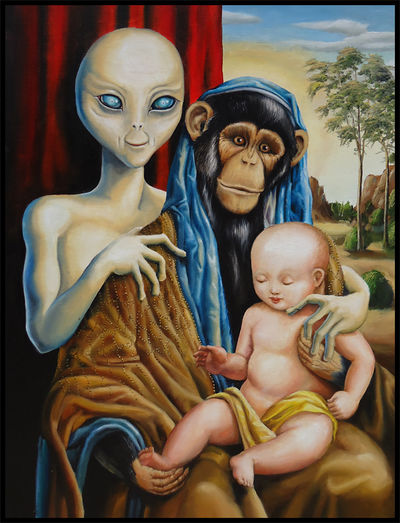 This image supersedes all previous images despite the fact that it is here, in the wrong article. Here we see the origins of Homo Sapiens Sapiens.

The archeological record indicates that anthropods, those dirty little half-monkey, half-crustacean pissants, suddenly showed up about 659BC outside a village somewhere in modern day Israel. The Bible makes many references to them, but by far the most remarkable are attributed to the prophet Gnjurk Sd'duedwa, who wrote of the anthropods thusly;

"and lo, there did come an ill wind, carrying within a stench so foul and widespread that presently the large village was kaizumed by it, and it was as though it lived, prying lips and forcing stink down throats. And lo! Did 7 times 7, and 7 again did take ill, and they did crawl from their homes, moving as one, as though some great mind like that of Shaitan, impelled them to seek out the waters of the lake. And thus did stuff like this go on for a long, long time. And then did the great scribe to King Mookie convey himself to the village on an ass led by an ass, which was led by yet again another ass. And lo, did I then call upon the Lord for strength and rub my hands in talc, to undertake the mantle of holy battle against the demons. And so, then, did I smother myself in the armor of God, and annointed myself with pitch, and kneel on the ground in the direction of the great miasma, and called upon the demons Gladys and the Devourer of Sponges, and Grumpy Knurdel and Sizzlean, and Philostedumass, and the Witherer of Men himself, Horkian. With my left hand I held the mighty cracked pepper of the Lord and with my right, I commanded the demons to lay waste to the source of the awful smell."

"Presently Horkian reported a group of small, ersatz part monkey, part crustacean creatures making annoying sounds, drinking beer and breaking wind with great fury. And I did confront them, and soon learned their simple tongue, and then it was commanded by the Lord that every man shall select a make a basket, and the Lord did give the dimensions in cubits, which I thought odd, but why not? And then did the Lord command that every male excepting myself was to carry one of the crustacean-monkeys in a basket, which was then strapped onto the mans back. And lo did they carry the hapless, stinking beasts about for 40 days and for 77 nights. And when the task was complete, the Lord did express his pleasedness by not killing anyone for no apparent reason for 6 days and 6 months, when Grapplehook Ben Mastadon was caught unawares by a Roc and spirited off to Mount Olympous, no doubt, to cavort with those filthy Greeks and their uncircumcised ways."