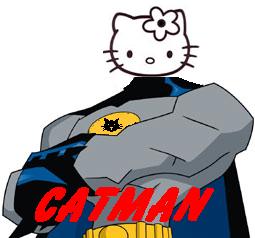 Catman. He is so super.

Feline, prostitute, bailiff, super hero, scholar, technician. Those are few of many profesions of Catman. But how did he get so many? Forget that.

Not to be confused with Batman, CatMan is widely known for his timely acts of heroism - that eventually turn into destruction, death, and loss of virginity. He has been jailed forty-six times for many many reasons such as poisoning a lake with his radio-active urine, destroying the Twin Towers, and stealing a lollipop.

Fuck, I don't really know. You see, the guy is half donkey, half cat, half man, half fruit, half redundant, half nothing, quarter duck, two-thirds potato, and one-eighth chunky. So it is kind of hard to come to a conclusion what his parents were. We do kow, however, that he was born once.

Anyway, as a young boy CatMan became interested in pornographic activities, and at the age of eleven lost his virginity. Then he got Super Aids and got Super Powers. Weird, huh? 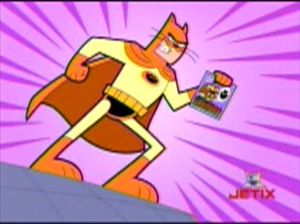 Soon he realized that being a hero was for him. He would be an UltraHero. That would be fun. And so he made himself a suit and went out to help the world, but he ended up sending it into anarchy. Things started to spiral downward after his first act of heroism, which was buying a dog, because he slipped into the crime world. He started doing bad things. Like eating ice cream. Bad.

Things weren't horrible until he destroyed the Twin Towers. That's where he became the most hated person ever. Until he blamed terrorists. Then his file was cleared and he went back to little things like smoking. 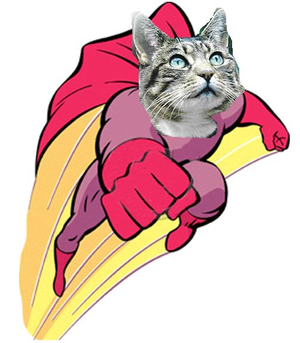 CatMan is the ultimate ultrahero. As you can clearly see, he is also not Batman.

CatMan has the coolest powers ever. Each one has it's own in depth look.

His most popular power is the ability to watch birds without getting dizzy. He is the only one who can do that. He is so cool! Or is he a she? I don't know.

Anyway, he can watch the birds and tell their molecular structure just by watching the amount of feathers moving in one breath. And he can also keep one eye watching two birds at a time while the other checks out that hot alley cat.

Everyone knows cats sniff everything to tell what they have done. Every one. But can those cats hypersniff? I don't think so! CatMan is the only cat that can HyperSniff, which is fifteen times faster than normal sniffing a cat does. He sniffs things asses like dogs three times as fast as a dog would. He is so awesome.

CatMan can also talk to God. That is cool because only Abraham or whatever can talk to god, but Abe's dead! So hah! Now only CatMan can talk to God. They usually have in depth conversations about stuff, usually Telephones and Books. He can also call for help from God if ever needs it. Hell yeah. That means he doesn't have to ride a bike with his helmet!

CatMan is so deadly

because of one reason: His pocket AK-47. He cracks that thing out and there is no way you will survive, even if you have a kevlar suit on. This cat is so awesome! It kills everyone at any time. He shoots you and you die instantly because the bullets are poisoned and and crafted at a local bakery.

This is another unstoppable feature of CatMan: his claws. The are made of sharpened titanium and are often unbreakable. They are also daimond tipped so they kill things easier. Some times he has to wear gloves so he doesn't scratch the leather on his sofa when he lays down.

Do you know how cats tongues feel like sandpaper? Well CatMan's is like that, except instead of having sand it is like having mini spikes. When he uses his tongue to lick something the thing gets shredded up like a banana in a blender. He uses it to rip flesh off of enemies for easier kills and to help groom his lustruous coat of fur.