From Illogicopedia
Jump to navigation Jump to search
File:LegoStarWars.jpg
This is in your computer, hacking it up.

“I remember watching Star Wars as a kid. I can also remember being sane before doing so.”

Star Wars is a great movie series, and there is absolutely nothing you can do about it! I don't care how confusing and corny the plot and character ties may be, it's still cool! 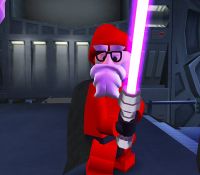 “I love Star Wars. But I want Star Wars to burn.”

“It was my intention to frustrate nerds like you. Losers!”

~ Darth Santa to that nerd

Star Wars was invented in some time or another by the perilous Darth Santa. It was originally created as a computer virus, which it remains to this day. Hackers and nerds everywhere are constantly stumped by its intense disk infection melee ability and its high fnurdle output ratio. However, some bum named Luke Ass took the sweet name and made a horrib— I mean flippin' sweet movie series out of it that everyone loves. Everyone. And if somebody doesn't like it, I'll just have to kill them, because I love Star Wars and it is the best.

Darth Santa, however, after inventing the virus, infected his own brain with it, and had his head hacked up by a viral lightsaber. That's right, the virus itself had a bunch of micro-electro-mini lightsabers that hacked the core of someone's DOS system (the virus came around in the late 80's). That means Luke Ass even stole that idea from Darth Santa too along with the name! And the stuff about Darth! What a bastard. I mean, God! GOD! Bow down to him. He made the greatest movie saga ever.

In Star Wars there are some movies.

How to combat Star Wars[edit] 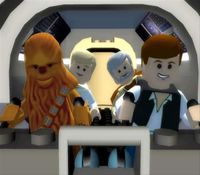 A perfect example of how to combat Star Wars. Well done, Chewie!

In order to prevent Star Wars from ever infecting one's strangely impressionable and ultimately very, very nerdy mind, one must ensure that, if it ever comes near you you sit on your helicopter's joystick until you receive a subliminal message that you can get off. The diagram to the right will give an example.