~ Dumb caveman about to meet his demise

“They are NOT lizards! When will people learn?” 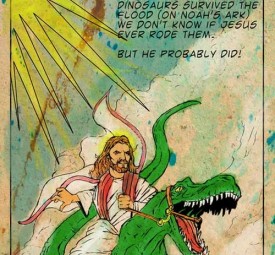 Jesus was like, hey, dinos are everywhere. So he biult a time machine to go to Noahś ark andd drown the dinos in an Oceans 11 style heist. Then he went back and relized there was 2 jesuses and he went to the future and became tom crusie

They were killed by a Fiat Uno driven by Prince Philip. Fact. At least according to The Daily Mail.

They were brought back to life! To live again! At this time! Alive! Again! With alive, again, at-

Yeah, they were brought back to life by those Jurassic Park people. With extremely bad graphics.

Dinosaurs died out becuase you touch yourself at night. yeeeeup.