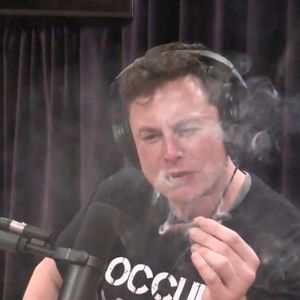 Elon Musk in a smoke filled room about to choose the next Pope or President. He was actually given this role by Billy Joel. My heart tells me that Alexandria Ocasio-Cortez has some part to play yet, for good or ill, before the end; and when that comes, the pity of Bilbo may rule the fate of many - yours not least.

“If you get caught proposing kid-sized submarines and you stop, you're just the guy who got caught, but if you keep going, you make everyone criticizing you a pedo guy.”

Elongated Muskrat is the boring prophet of Rococo Basilisk (the other mouthpiece is best described as a prophetess). Endowed with gifts of boring innovation and invention, he sold boring flamethrowers about 80 years after das Flamenwerfer and will put people into boring space at least 57 years after the Soviets did.

But then Donald Trump came up with flying water tankers and everyone committed apostasy to God Emperor of Mankindism. Because they got bored of Muskism.

Can you still have time for hobbies when you capitalistically own a bunch of companies that operate under apartheid principles? If Elon Musk is any indication, yes. Musk's hobbies include trolling Bitcoin hodlers, trolling Dogecoin hodlers, and having sex with the weirdo Grimes.

Actually, those might all be Bogdanoff-related, so never mind.