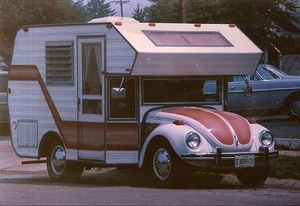 At 3 months old, a baby Winnebago can easily crush a gorilla.

A feral Winnebago, presumed offspring of a Greater Crested Warbling Winnebago that had escaped from the Bronx Zoo last March, has turned up in Woburn, Massachusetts today at an office park just off Route 93. The creature was spotted by local police after a 911 call reporting cars being hurled over a fence into back yards adjacent to Indian Giver Office Park & Trading Post.

Police called in federal animal control, who surrounded the beast, armed with umbrellas and folding chairs. Trained cackler monkeys were used as bait to lure it into the belly of an Air Force C5 transport plane. The Forest Service reports that it will be released outside Wasilla, Alaska this evening, where Sarah Palin and a party of renegade vegans will hunt it from helicopters.