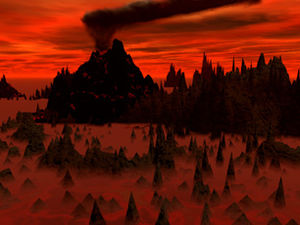 Yup, it sure is hot.

HELL, CALIFORNIA, In a recent press conference today. The Devil, owner, creator and mayor of what used to be called Hell has now been renamed. Really Hot Place Under the Earth". The Devil said in a press conference that "The new name really reflects the atmosphere. I always thought Hell was a confusing name to begin with. Now the new name, it really fits us. We're a really hot place under the earth with rocks. How much clearer can you get?" Many christans have disagreed with the name, threatening to stop praying to both God and the Devil until the name is changed back. One christan says that "Hell was a perfect name already. Pardon my french but the name is a freaking disgrace. One I can't tell my kid that he'll be going to that place if he misbehaives, he'll forget it immediately. This is freaking poopy. Especially for the entire christan community." Another christan says that "The new name is perfect. When I say hell, I always think... Huh? What is that place, now that the Devil has finally renamed that place, I can finally tell my son what hell truely is." The conflict against the christans who like the name and christans who don't like the name is growing and will likely be similar to Scientology's war with Anonymous, a religion that is sparsely-known itself. More on the story as it develops.