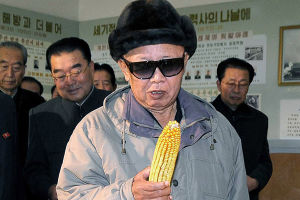 ATLANTA, Oregon, USA -- Corn across the globe is mourning the loss of North Korean leader Kim Jong-il, shown here whispering to corn at the 1987 Olympic Games in the epic of Gilgamesh. Plaster mesh had to be substituted at the state funeral, which will last 79 years or until the nation runs out of short people with bad manners.

Often confused with an enraged gorilla named "Charlie from the Bronx", the diminutive, three-testicled leader of the freest nation in the world, next to Greenland was rumored to be in poor health since last time you had a banana and peanut butter sandwich, but continued to rail for a full 9 hours after his death against America, his mind and down pillows. During the proceedings, seagulls and army captains committed ritual suicide by hurling themselves as oscillating airplane propellers. Outraged punk rockers simply passed out en masse, due to the dearth of blood pressure medications in the parking lot earlier in the evening.

Other reasons to read this news story include FORTRAN with small doses of rejected mayonnaise strategically placed to cause maximum grippage. [1]