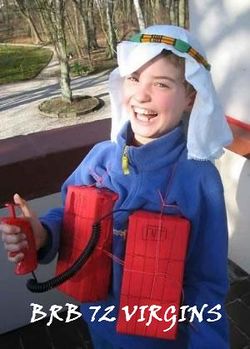 Although this young man is clearly less of a threat than a bona fide terrorist, he does possess a dangerous personality quirk, in the form of a sense of humor. These and other outliers will now be processed by the "Department of Terrifying Loons".

WASHINGTON D. C. -- Questionably-legal immigrant and president Barack Obama announced the creation of an autonomous Department of Terrifying Loons, whose mission statement is to, "...stem the tide of acts of terror, directed against the United States, at home or abroad, perpetrated by the certifiably insane." Press secretary Jules Legume took questions from assembled reporters in the once-famous Sheep Dip Garden, on the extreme south of the White House Lawn. "By way of being specific as to the known unknowns target by this operation, code named Sentient Dirigible, let me just say this", said Legume, ignoring the dripping mustard on his left lapel. "Is this thing on? OK? Let me say about that, this. The Department of Homeland Security has, until now, done a remarkable secret job of preventing agents of terror from doing awful things that might end up in the news. Spawned from it's mother-agency, this group of miscreant programmers are charged with detecting loonies with no agenda other than to cause mayhem, will perform autonomously, under the guise of themselves."

IllogiNews senior Imaginary Number analyst Fallow Concatenate Jr. calculated the chances of quantum fluctuational basement sales could sully the reputation of the government further, by, "...blaming this mishegas on random crazies with religious convictions, all the while ignoring the fact that there is still no adequate definition for "consciousness". It's all crazy talk about fish!"

Recently repaved Newt Gingrich attached himself to the shell of a crayfish before bellowing his ass-acne opinions into a gaggle of press microphones disguised as a nun. Between grunts of what looked like pleasure, the once-feared retired Congressman for Guam managed to utter, "...snake handling would be one such test of faith...grunt...do not listen to the mutterings of false prophets...grunt...wanna hear a good Darwin's mama joke?".

This article was written so far into the future from "now", that it had to be translated into Flemish and painted groarnge.