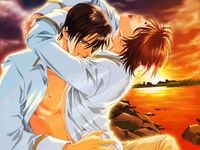 Liberals are doing stem cell experiments to get anime characters to marry legally.

Jubilant victorious Tea-partiers, many of them bat fuck conservatives too weird for even the Republicans to get behind openly, bustled about, humming "Walking On Sunshine" and inspecting one anothers bums. This wild pack of jumped-up for Jesus, knee slapping closet sexual deviants got together to celebrate their conquest of the House of Representatives, an arm of the CIA and the Congressional leg of the United States government.

Before dawn, this pack of jackals will have legislation passed and ready for inspection by the Senate, or the Bung 100, as Lewis Carroll called them. In brief, this artillery barrage of legislative assaults against the common man will seek to eradicate abortion, gay marraige, stem cell research and a host of other behavior that infringes on my right to own guns. Lots of 'em.

Arkanbama Senator Jesse Helms (R) beamed as he floated above the crowd, tossing Mister T key rings to enraptured disciples. "We have here the opportunity to roll back all of this Socialist crap that's been passed since Josef, er, Barack Obama took office. You know where it's going next unless we stop it, don't you? Filthy disgusting anime marriage! We can't have it, not in Gods country damn it! "