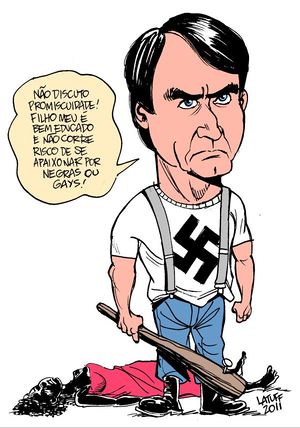 Ideology of the saying whose, exercised in practice

Jair Mengele Messias Bolsonaro is a Brazilian politician, ex-DOI-CODI soldier and founder of PNB (Brazilian Nazi Party). At the age of six, Bolsonaro hit a homosexual for the first time with a fluorescent lamp, in addition to having fun hitting the black maid and the Jewish butler. At twelve he entered the military school of campinas where he learned methods of medieval torture that he would later use at DOI-CODI. At eighteen he joined DOI-CODI and became a bogeyman among revolutionaries who fought for democracy. At the age of 24, he founded PNB and began to fight against plagues such as freedom of expression and equal rights for all.